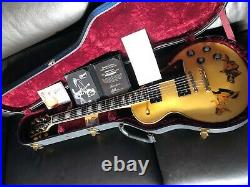 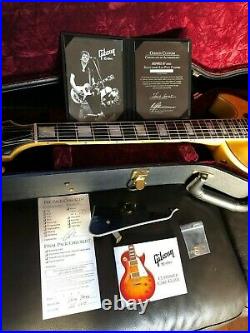 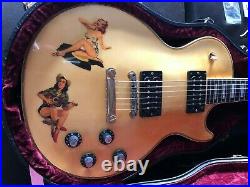 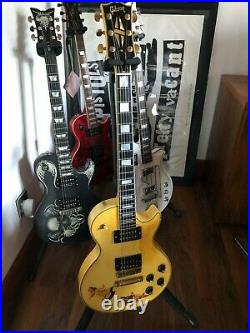 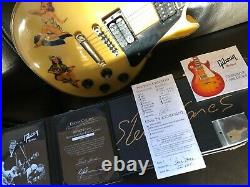 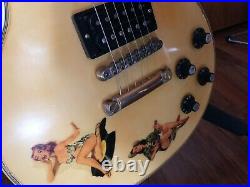 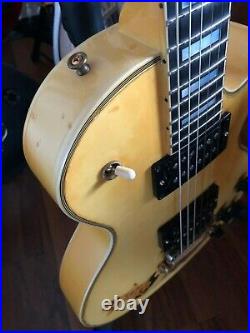 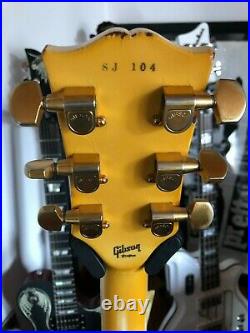 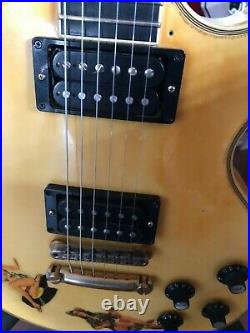 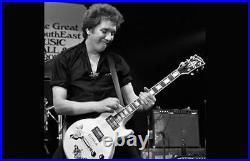 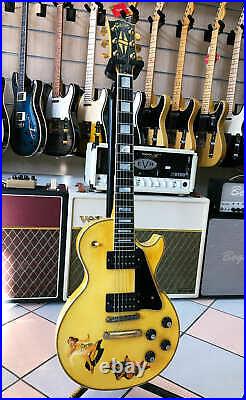 2008 Gibson Custom Shop Limited Edition Steve Jones'74 Les Paul Custom #104 Aged White in excellent condition, only ever kept in its case. Mega rare opportunity, as these Gibson SJ Custom guitars hardly ever come up for sale! This is an exact replica of The Sex Pistols Guitarist Steve Jones 1974 White Les Paul Custom with Pin-up Girl Stickers. And other info / parts (see pictures). It weighs around 10 Pounds.

In perfect condition, all wear and tear purposefully replicated by Gibson (see more on that below). These were made in very limited numbers and are very rarely do you see one for sale, reluctant sale of this stunning and ultra rare piece of punk rock history. History, Body and Neck & Hardware below. But thats exactly what happened to Steve Jones, who as the Sex Pistols lead guitarist helped define both the sound and style of punk rock. With just one album, 1977s Never Mind The Bullocks Heres The Sex Pistols, Jones revitalized rock guitar shaking it back to its brutal three-chord roots.

This thrilling, ground-breaking album catapulted the bands four members into a chaotic ride that lasted all of one tumultuous year. Throughout it all, a white 1974 Les Paul Custom was defiantly slung over Jones shoulder as he delivered the raunchiest and surprisingly melodic guitar playing the first wave of English punk ever produced. Over the years, this Les Paul Custom with pin-up girl stickers has become one of rock and rolls most iconic symbols, with a history as poignant as it is anecdotal.

The Steve Jones Les Paul Custom is a fitting tribute to one of rocks most unsung and unlikely heroes and the guitar he used to make history. Its white finish has been aged to match the patina of Jones original instrument.

All of the hardware, including the ABR-1 bridge and stop bar and tailpiece, is gold and has been lightly aged to give the guitar its truly authentic look. The pickups are two of Gibsons best humbuckers for playing the type of intense rock and roll made famous by Jones and the Sex Pistols Gibsons 496R humbucker in the neck position delivers incredible sustain and cutting power with its ceramic magnet, adding more highs with increased definition and no muddiness at all, while the 498T in the bridge position swaps the Alnico II magnet to an Alnico V, thus making it slightly hotter with emphasis on mid-ranges and highs. The pole pieces on the 498T are also aligned a little further apart to accommodate the spacing of the strings at the bridge, which is different than the spacing of the strings at the neck. The Steve Jones model comes with the standard Gibson Custom case and certificate of authenticity signed by Steve Jones!

A MUST HAVE COLLECTIBLE ITEM FOR THE SEX PISTOLS FANS OUT THERE. The item "Ultra Rare Steve Jones Gibson Les Paul Custom Guitar Ltd Edition c/w Signed COA" is in sale since Sunday, December 13, 2020. This item is in the category "Musical Instruments\Guitars & Basses\Electric Guitars". The seller is "edward9949" and is located in Forfar. This item can be shipped to United Kingdom.