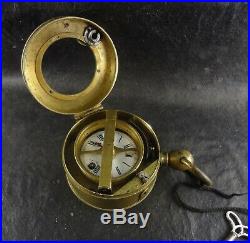 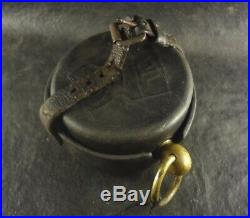 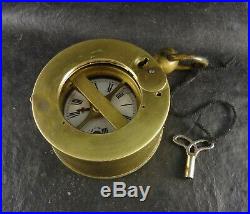 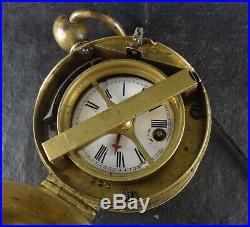 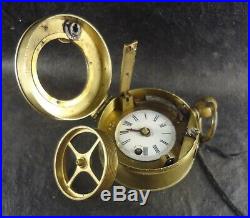 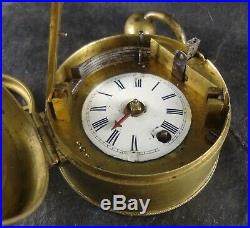 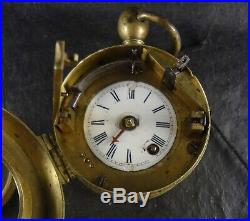 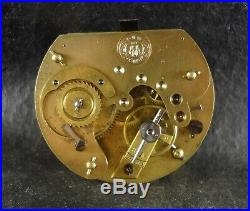 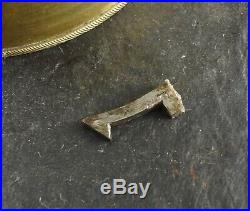 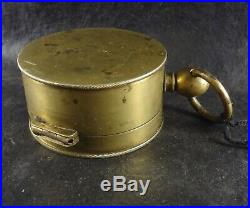 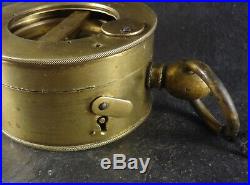 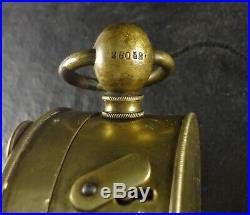 This is a pre owned & extremely rare Johannes Burk night watchman´s watch. This model is impossible to find, because it is the first edition and it has its original leather box. This earliest model has an enamel dial, cover with circular glass to see dial (other models have hidden dial), and brass case in unsigned (in this first edition only movement is signed). Rest of editions has a metal dial (not enameled), hidden dial when case is closed, and case is signed in one or several parts by Burk. Lower serial number you can find in all internet (serial number on case and movement is the same: 26052).

You must use a screw to fix. Lock hook (very easy to resolve - original lock hook is included - sed detailed pictures). Only key to wind it up is included. All defect not mentioned but visible in the pictures will be considered as described. If you have any question, please do not hesitate to contact me.

Thank you for your visit. "Invents" the portable night watchman's watch in 1855 and then founds the Württembergische Uhrenfabrik in Schwenningen (south Germany). His son Richard Bürk extends the program to include working time control devices.

From about 1902, control watches are manufactured under the name "Bundy" or "Bürk Bundy Original". "Starting at an unknown date in the early years of the Bürk firm, these clocks began to be serially numbered and to be marked "J. These clocks were produced to an amazingly uniform design through at least 65 years represented in the Detex Collection, that is through number 74,885 (1921).

The most obvious alterations were in fabrication and markings of the face dial and, in later years, use of platform escapements. A detector mechanism was added (a spring to mark the chart when the cover lock is actuated). Escapements vary, but throughout the movement is almost invariant, and the chart drum rests on and is carried by the hour hand, in the absence of a minute hand. The standard unit had a drum for six stations.

In Europe, but apparently rarely if at all in America, models with drums for 12 and for 18 stations were marketed. Within five years of introduction of the drum clock, J. Buerk of Boston persuaded his brother to produce for him a much simpler clock using a flat, disk-like recording chart instead of the more expensive design with the turned recording drum. That set the direction followed by all other makers (except for tape clocks in later years) and held down sales of the "Original" in the U.

The item "ULTRA RARE 1ST MODEL 1855 YEAR NIGHT WATCHMAN CLOCK WATCH BURK OLDEST EDITION" is in sale since Wednesday, April 24, 2019. This item is in the category "Collectibles\Clocks\Antique (Pre-1930)\Other Antique Clocks". The seller is "rarityland" and is located in Capital Federal. This item can be shipped worldwide.