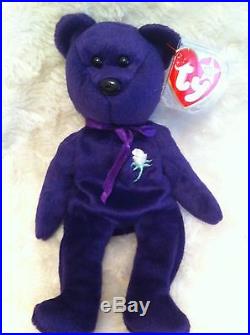 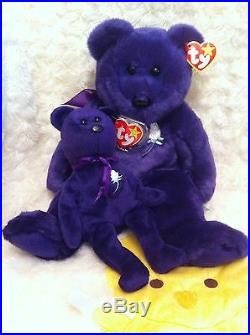 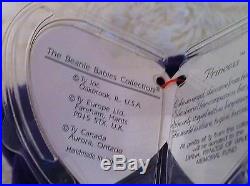 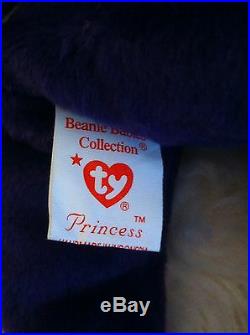 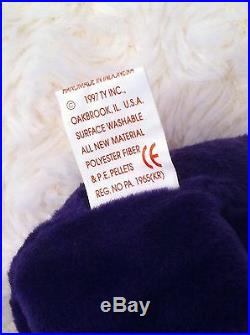 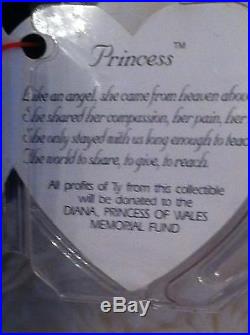 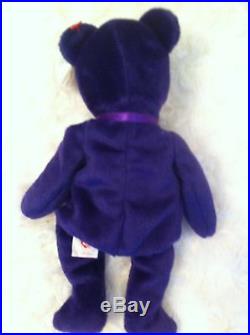 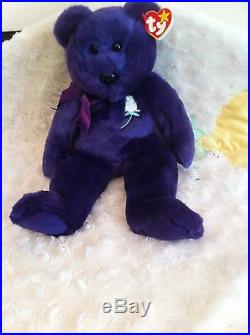 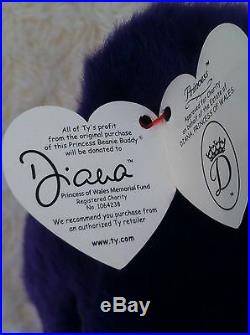 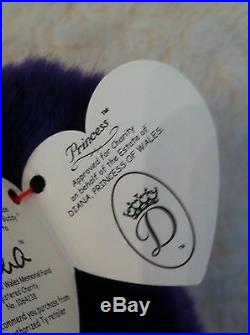 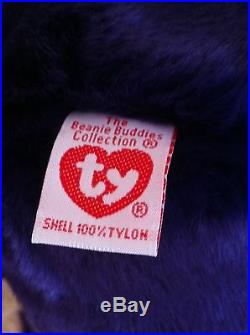 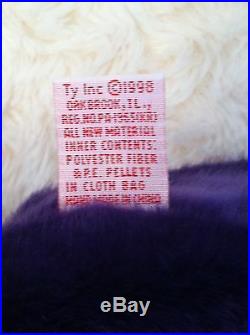 This bear will only go up in price. On sale is this TY PRINCESS BEAR Ultra Rare first edition 1997 bear Hand made in Indonesia, no space swing tag Ty address Fareham Hants on left swing tag R and TM with a star on tush tag Tush tag says 1997 PE pelletsnote no stamp on the inner tush tag as in the 1998 bears according to the information below from the official Beanie Babies website. The other rare piece on this bear is the swing tag, other than the location they were made and that is on the last 4 lines of the inside right that refers to the Memorial Fund. Later versions had a space between the 2nd & 3rd lines of the reference to Dianas Memorial Fund. All versions prior to that had no space.

The Princess Beanie buddy is a gift to the purchaser of this rare bear. From the information below you will see that there were rumours of a PE pellet bear from Indonesia this is a very rare bear indeed.

And has only been taken out for photographs. THE INFORMATION BELOW IS FROM THE OFFICAL WEBSITE beaniebabiespriceguide.

Com/princess-beanie-baby/ In October of 1997 Ty Inc. Announced that a Princess Beanie Baby was on the way. It was a charity Beanie with all profits going to the Princess Diana of Wales Memorial Foundation.

The bear first arrived in retail stores in mid December of 1997. In late December 1997 to very early 1998 Princess began arriving in Canada & Europe. These tags were PVC Made in Indonesia. This version is the hardest to find because Ty discontinued manufacturing in Indonesia due to quality issues & ceased using PVC pellets so there are far fewer of these than any other version. In early January 1998 Ty Inc. Began talks with Greenpeace to cease usage of PVC pellets & begin using PE pellets. This corresponds with the Princess timeline.

In early January of 1998 Patricia Roche of Ty UK wrote in a letter to retailers to please let collectors know that there would be plenty Princess Beanies available shortly. In the 1998 Ty Retailers Catalogue, given out at the beginning of the year, Princess Beanie Baby appears, and is listed on the order form. On Feb 9, 1998 Greenpeace protested at the New York Toy Fair to halt the usage of PVC in childrens toys, and they announced that Ty Inc.

Would be using PE Pellets for all future products. Greenpeace had commissioned a study of PVC ending in late 1997 and Ty Inc. In mid to late February of 1998 some people claimed to have received Princess with PE pellets. It was never confirmed through photographic evidence. It never came from any reliable source.

There is only one change to the swing tag other than the location they were made and that is on the last 4 lines of the inside right that refers to the Memorial Fund. In early May of 1998 collectors noticed yet another change. Beanies were showing up with red stamps inside the tush tag. It was first noticed on Peace and later confirmed on Princess. All Princess Beanies have a red star on the tush tag, the tag on this beanie is faded as shown in photo Some say there was a change in color on the embroidered rose stem on Princess Beanies chest.

This all goes to dye lot variations. You can line up Beanies all night and all day and youll find slight color differences. Its the dye lot, not an oddity or a mistake or a change. The item "Ultra Rare 1997 TY Princess Diana Beanie Baby Bear PE Pellets.

1st Edition" is in sale since Sunday, April 7, 2019. This item is in the category "Toys & Games\Beanies\Ty Beanie Babies\Retired". The seller is "paulinadiva" and is located in Bromley. This item can be shipped to United Kingdom.