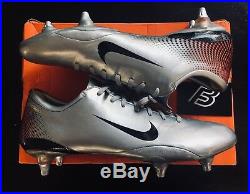 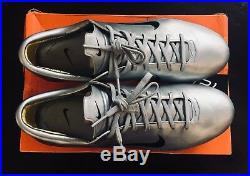 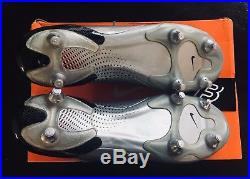 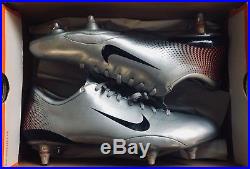 These Nike boots have undergone a thorough inspection of quality, functionality and condition to determine the level of condition required to meet our strict standards. They have also been checked to ensure authenticity and are 100% genuine. Notes: Worn once - like new. The Nike Mercurial Vapor III brought significant changes to Nike's ultimate speed product with Teijin microfiber, engineered to conform and adjust to the foot's shape, introduced to the upper.

The Nike Mercurial Vapor 3 also featured increased padding on the exposed, form-fitting heel cup to evolve the fit, completed by an anatomically contoured speed last and a carbon fibre heel wrap to distribute heel-strike impact. Thanks to a two-piece plate with direct injection studs, no concessions to multidirectional traction or acceleration was spared in the design. Like its predecessors, the Mercurial Vapor III came in colors befitting its speed.

The Brazilian Ronaldo celebrated his all-time tournament scoring record in 2006 with a limited-edition version of the Mercurial Vapor III R9, and signaled a decade of Mercurial speed with a 10th anniversary edition (released in 2007) that brought the distinctive color scheme of the original Mercurial to the carbon fiber-aided Mercurial Vapor III platform. Cristiano Ronaldo wore a bold Cactus colorway. All in all, it can be said that the Nike Mercurial Vapor 3 soccer boots were one of the most important new generations marking a important point in the evolution of the iconic speed cleats. Brought to you by Bootsfinder. More boots available at Bootsfinder. Bootsfinder, YORK, NORTH YORKSHIRE, UK.