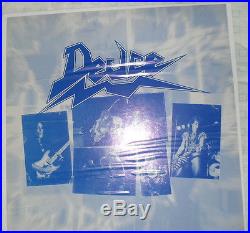 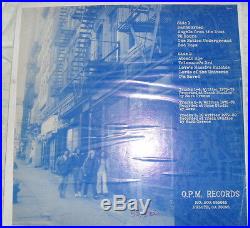 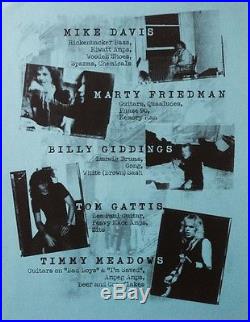 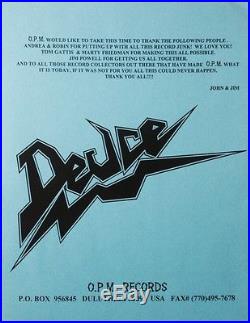 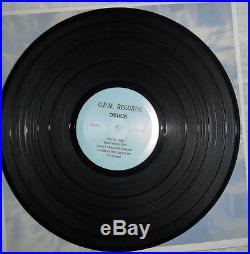 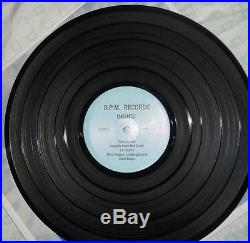 Limited edition, 500 copies, hand numbered Back in 1978 when a young guitarist/ vocalist, Tom Gattis (15) relocated from Wyoming to Maryland with the intention of forming a high energy, heavy rock band. Tom was amazed at how perfectly Marty could play Ace Frehley leads, and Marty liked Toms punk, snotty rhythm style. The two then recruited bassist Steve Leter and drummer Chris Tinto, and in late 1978 DEUCE was born. In early 79 Chris and Steve were given the axe due to their disinterest in the band. Upon the recommendation of a local drum instructor, Tom decided to audition a young drumming prodigy named Billy Giddings.

Billy had no problem letting people know how good he was, but the difference between him and your average braggart is that Billy would back it up by tearing opposing drummers to shreds no matter how old or experienced they were. The bass position was filled by the unlikely Mike Davis, and the classic DEUCE line up was formed. In mid 79 DEUCE was starting to draw large crowds at a practice area known as The Barn, Which Toms mother built for the band. These band jams would draw anywhere from 20 to 100 metal starved kids a night, complete with an open air marketplace for drugs and alcohol, as well as hosting some classic DEUCE jams to date.

In late 79 yet another line-up experiment took place as Tom stepped away from the microphone. With the addition of lead singer Eddie Day, DEUCE expanded to a five piece. This would last until 1980, when Eddie was booted and the four piece line-up was back in tact.

In 1980 the colorful Mike Davis was replaced by Chris Hall who played bass in a rival band called Ace. He was then replaced by lead guitarist Timmy Meadows, who was the younger brother of Angel axeman, Punky Meadows. In the later part of 1980 DEUCE went into the studio a recorded a 7 single, Im Saved c/w Bad Boys (this single has become a gem in the metal collectors market), which received very positive reviews worldwide. One night in late 1981 the woodstove used to heat The Barn threw a spark and caught the barn on fire. By morning everything was gone, barn and all of the equipment.

Undaunted by the tragedy, DEUCE continued. Ironically the barn fire turned out to be a blessing because now they were forced to play live elsewhere, besides the barn. In late 1982 Chris was replaced by a friend of Meadows named Mike Francis. By 1983, DEUCE was gaining popularity fast by opening for acts like Ratt , Queensryche , Grim Reaper , Talas , etc.

As well as continuously gigging at local bars. The underground metal scene was rising, the gigging continued, the buzz was circulating, and then record label interest arose. A young record company, Torrid Records, (who also released the first Exodus LP) was interested in signing the band.

Just before signing in 1985 Mike Francis quit and was replaced by the amazing bassist, Timmy OConnor. In October of 1985 the band flew to Capital Records studio in L. To record their debut album. Problems arose when the equipment rented for the album sounded horrible, almost unplayable, but the band persisted and continued to record. At one session, the band received news that there was another band with a copyrighted name of DEUCE, so Billy suggested the bands name be changed to TENSION.

The name seemed to fit perfectly at the time, so it stuck. Please do not hesitate to contact me if you have any questions. Thank you for your support. The item you will get is what you see in the image.

The packages will be prepared with care by me. The item "DEUCE Heavy Metal Marty Friedman Limited edition Ultra Rare Vinyl LP Numbered" is in sale since Thursday, December 31, 2015. This item is in the category "Music\Records". The seller is "lusitansimon" and is located in Riachos, santarem. This item can be shipped worldwide.