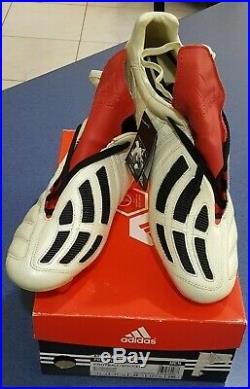 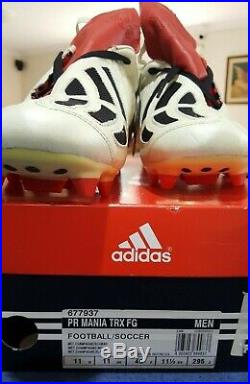 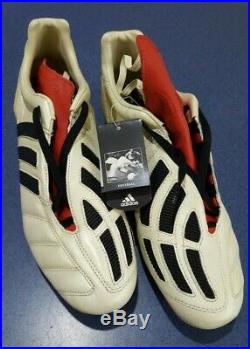 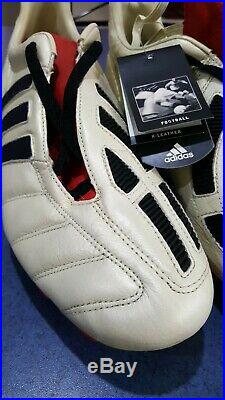 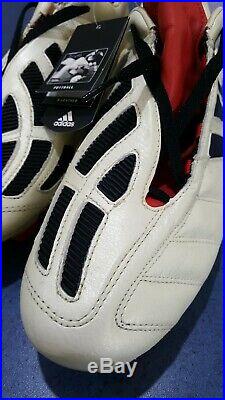 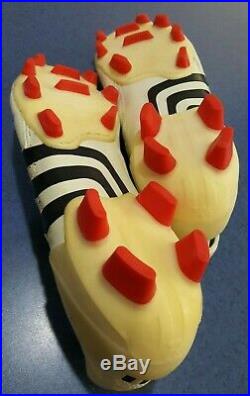 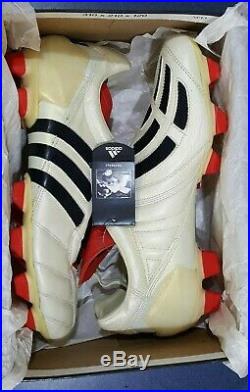 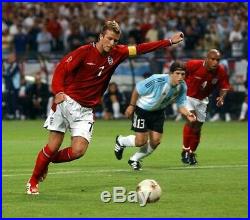 Have never even been tried on. Don't let this opportunity to go to own a piece of Adidas football history. The Adidas Predator Mania has become a very famous and iconic boot over the past 16 years. I'm not going to sit here and babble why these original Predators Mania are one of the most exclusive soccer boots ever made and worn by some of the world's best players. If you're looking at this ad you know these are often regarded as one of the best Predator models ever created.

But in case you need reminding, here's 7 reasons why the 2002 Adidas Predator Mania TRX was one of the best football boot ever made. 1 The Faultless Design - Perfection. This thing was a work of art. 2 The Tongue Strap - This was probably the most needed addition from previous Predators, as the laces would always get in the way. Now, neatly tucked under the tongue and secured in place, you were free to strike the ball with optimal contact.

3 The "Curly Bits" - The famous Adidas precision strike zone is the defining feature of the Adidas Predator. For the 2002 model, the "curly bits", as they were affectionately known for aiding in the addition of curl to the ball, now finally added an aesthetic pleasure to the boot. 4 The 2002 World Cup - 2002 World Cup Japan & Korea was an absolutely brilliant tournament, and two Adidas products became synonymous with it. The Fevernova match ball (the gold one with the honeycombs), and the Predator Mania.

The fact that Adidas felt the needed to remake them speaks volumes however these replacements could never live up to the originals on which they were based. In my opinion the materials used were poor. It used a synthetic upper similar to the Adidas Ace 16.1 model, instead of a quality kangaroo leather. In addition, the sole plate was from the Ace 16.1 as well, which is no where near the same quality as these original Predator Manias.

This will be a further reasonable cost to you and will vary depending on the final sale price but a wise investment. This can be arranged for overseas addresses too and the cost will vary. If you prefer a pre-owned near-perfect condition pair of the same boots, please see my other ad as well as the iconic 2002 World Cup Fevernova Football that has also never been inflated and comes in it's original packaging. The item "Adidas Predator Mania TRX Champagne/Gold Limited EditionULTRA RARE ORIGINALS" is in sale since Friday, May 17, 2019. This item is in the category "Sporting Goods\Soccer\Clothing, Boots\Boots". The seller is "pav-sin" and is located in Wishart, QLD.